The Hall of the Mountain King... 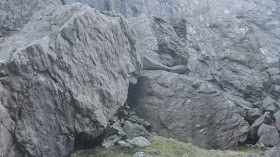 Over the last few weeks a small hole in the Pass has been the aim. Always keeping back some skin and psyche for the twin lines on the back of a big lump of rhyolite in the Pass. This hole became rather grandly dubbed The hall of the mountain King by a fairly merry CJD during the LLAMF party. All days off were directed towards her, and most days ended with a visit.

To begin at the beginning about 12 years ago I needed a shit and went scrambling round the back of the barrel looking for a hole, instead I scrambled into a big steep cave. Because of the way it had landed (in Wales most of the steep rock seems to need support) you could conceivably climb the full height of about 25 feet with the floor (well another boulder) rising behind you. I enthusiastically tried pulling on in various places, to discover it was a bit crumbly and needed a good clean, I assume this is because it doesn't get the full force of the weather. Over the next few years I scrubbed it a few times and kept chalking up the left hand curving line, the hole kept shedding skin. Over the next few years I showed a few people and told some more, Dyer looked at it with a ladder but didn't get involved. CJD and Hock had a go at pulling on, but were basically pulling holds off faster than they were moving up. Pulling out the big guns I showed the line to Mickey and Leroy one night. They were keen but not here most of the time, looking back thank the lord they were too busy ticking to bother cleaning it up.

This year I caught the project bug badly, old lists of problems and places to check out appeared, I went up and got drunk in the hole, paying my dues and seeking the lines. If the stand up to the corner went then all the lines would work, they could join that to make an exit through the top hole. I spent the day scrubbing again and holds appeared and disappeared, the left line had what looked like a crucial undercut to pull on and reach a sloppy crimp with your left hand. It snapped, bugger, but fortunately a crimp down and right cleaned up and was usable, then the whole sloppy crimp broke leaving a finger jug, I carried on making progress to hold positions and stuff, without really trying the moves while the problem evolved.

At the beginning of February I was a bit stale on The Crest, so decided to take a spotter and try to climb the exit. This went down at about V6 it feels weird to climb as you have to lock in to do the moves or else you lie down on the block behind you, not ideal but it works. Ollie failed getting wigged out whenever a foothold snapped. It is a bit strange you look to your left on some of the moves and you can see the floor miles below and the slab behind you drops away on that side. All I can say is various things have snapped while I was on it and all that ever happened is I was on my arse 6 inches lower.

A couple more cleaning and playing sessions, and I seemed to have it all solid, some of the moves went others didn't. I recruited CJD as I knew I could say "please don't do that one" about the left line and he wouldn't. The other line was now the main focus, I sat back a bit, thinking the top would break him even if he did the bottom section first. After 5 sessions, I was sort of right, he did do the bottom section first and mentioned finishing on the jug. I told him that he could if he wanted to be superseded, next time through the hard start he was scrapping and locking as hard as he could, quite funny and a good effort. He called this line Stoned temple Pilots, and we think its bottom end of 8a+. 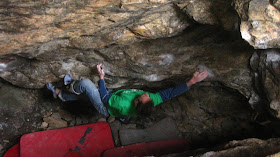 
In the meantime while losing the showdown with him on that one he had been pushing me through moves and working pieces of the curve line. This one was my major inspiration of the cave. Eventually I had done all the moves in the middle section and started to link through from the finger jug to the throw for a crimp in my right hand. The first 2 moves were done on their own and seemed fine. I went up to the crimps by scrambling down from the top, getting on worried this section would be hard, I pulled through and made it first try to the sanctuary of the easy top. At this point I was regretting the decision to not eat, and felt very strange indeed. After a few red points and cigarettes, I bailed, knowing if I wanted to do it this week, and I really did, then I needed to save my skin and come up fresher.

The next day dawned rainy it had been pissing it down all night, this is where th 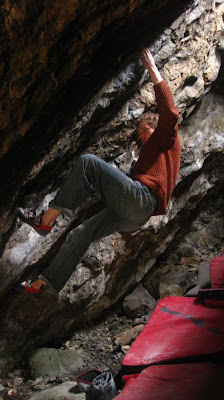 e waiting post yesterday came in. In the end sitting it out was the right call not only was it all dry but it was in very good condition with a good wind blowing in the valley. It took a couple of goes to link but after all the preparation seemed reasonably straightforward. I guess its the law of averages that If you keep trying projects occasionally you get the process right, In total it took 9 sessions of climbing on it in the last 6 weeks, loads more cleaning and looking at it over the last 12 years, and only 9 attempts to red point it. The grade is V12 I think, its very sustained for the first 7 moves then gets easier, its a bit crimpy for me really so maybe I am wrong. Time will tell, I think I am calling it The Tracks. 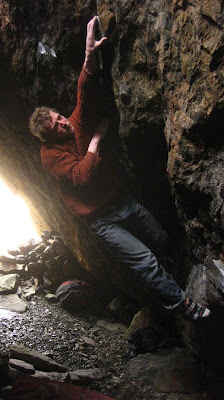